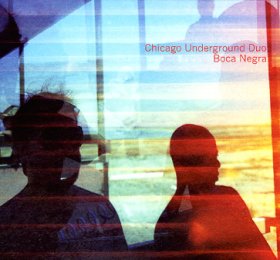 The fifth album from the Chicago Underground Duo — Chad Taylor on drums, vibes, mbira and electronics and Rob Mazurek on coronet and electronics — a hypnotic aural experience from a pair of modern masters who seamlessly craft a world of influences into their own dynamic sound! It’s pretty amazing stuff, with the pair working with sounds from the avant jazz underground of the previous several decades,jazz and world folk music that reaches from Africa to Brazil, and the subtle manipulations of the electronic experimentalists.

Some movements build to a dexterous intensity, with Taylor sometimes playing different instruments simultaneously, but it’s not about the brazen display of skill and craft, the compositions and the improvisations feel natural and vital. Wonderful stuff, we’re very proud of the Chicago underground jazz scene that inspired both players and their title! Titles include “Spy On The Floor“, “Green Ants“, “Left Hand Of Darkness”, “Quantum Eye”, “Vergence”, “Conflicition”, “Roots And Shooting Stars”, “Hermeto” and more. 10 tracks on the CD.