We’re near the end of the year and new music continues to be unveiled and beckons the hungry souls of music aficionados. In this case, to my surprise Myriad 3 a robust trio of young, accomplished and talented musicians from Toronto, Canada landed at my door step and immediately harnesses my attention with their spontaneous, extraordinary and determined collection of improvised music aptly titled “TELL” now available on ALMA Records. END_OF_DOCUMENT_TOKEN_TO_BE_REPLACED

A trio of acclaimed jazz musicians is heading to Colwood on what will be their band’s first tour outside of Ontario and only the second time the group has played outside of Toronto.

Featuring pianist Chris Donnelly, Dan Fortin on bass and Ernesto Cervini on the drums, Myriad has stops in Calgary, Vancouver, Kamloops and Clearwater before playing Hermann’s Jazz Club in downtown Victoria and, most importantly, at a Jazz Vesper at the Church of the Advent in Colwood.

Like Before, Somewhat After, and is the first to concentrate on the leader’s own music. Six of the eight tracks here are original compositions the group has shaped on the bandstand over the past four years. The other two are arrangements of Carla Bley’s “Jesus Maria” and a piece by the severely under-recorded composer/lyricist Margo Guryan called “Edwin”. -[Editorial Review | Amazon]-

THE HALFWAY TREE, a Manitoba (Canada) landmark, is a prominent cottonwood tree that stands out on the horizon along Highway 1 between Brandon and Winnipeg. It is also the name of Karl Jannuska’s fourth cd as a leader, which features the beautiful tones of one of Canada’s most talented vocalists, Sienna Dahlen. A collaboration that began four years ago, the repertoire is entirely comprised of the leader’s original compositions while both Karl and Sienna contributed to the lyric writing.

As a follow-up to their lauded duo recording, “We Couldn’t Agree More,” soprano saxophonist Brent Jensen and pianist Bill Anschell decided to enhance their tonal palette, eliciting help from bassist Chris Symer as they explore a set of jazz standards with an uninhibited, free-wheeling interplay. Reminiscent of the great duo and trio recordings of Lee Konitz, Jimmy Giuffre and the like, their in-the-moment creations are singular and timeless. “We Couldn’t Agree More” consistently throws sparks at the listener and comes with about as high a recommendation as I can give an album.? – Chris Robinson, Earshot Jazz.

At a glance, this project has eight pliable originals plus the contributors has fourteen albums among them as leaders and sidemen. Human Spirit is the title from a previous album by trumpeter/composer Thomas Marriot, along with his cohorts Mark Taylor and Matt Jorgensen serve up an engaging brew of bop-influenced modern jazz also features two guest performers Orrin Evans and Essiet Essiet round out the quintet on their latest “Live at the Earshot Jazz Festival” (Dialogue) was recorded two-night engagement at Tula’s Jazz Club in Seattle, WA is currently available on the creative, innovative and eclectic Origin Records. END_OF_DOCUMENT_TOKEN_TO_BE_REPLACED

Drummer/Composer Duduka Da Fonseca is a blender, set at high speed. The Brazilian drummer (born in Rio De Janeiro in 1951), who arrived in New York City in 1975, has been actively exploring the perfect marriage and mixture of jazz and samba since forming his first Samba Jazz trio as a precocious 14 year old (a band he called “Bossa Trio”), with brother Miguel on bass. Over the years Da Fonseca has becomea master at combining these seemingly disparate worlds, and has emerged as one of the foremost proponents of the genre. END_OF_DOCUMENT_TOKEN_TO_BE_REPLACED

This first record of music collecting the spirit of friends and band mates into a single, cohesive and multilayered voice, guided by the stars of our own radiant milky way wilderness, includes Mark Allen on baritone and soprano saxophones and flute, Jon Rees on alto saxophone and flute, Dylan Babitch on piano and fender rhodes, Ian Brick on electric guitar, Jon Smith on electric bass, and Jason Fraticelli and Brian Howell on upright bass. i went to music school with most all of these guys, (except Jason, whom i met through mutual friends), where this group was conceived and went through various growths and forms performing around philadelphia. this music has been in the making for nearly 5 or 6 years now, and was recorded in january 2011 at morningstar studios. END_OF_DOCUMENT_TOKEN_TO_BE_REPLACED 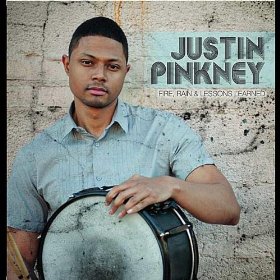 In this freshman release, Justin endeavors to take your soul on a rhythmic journey and speak to you through heart-pulsating rhythms, funky bass lines, lush piano chords, caressed by sweet melodies. This project pulls from some of Justin’s musical influences including Jazz, Neo-Soul, Funk, and R&B and is a result of years of writing, tweaking, fine tuning, rehearsing, and jamming. The name of the project encapsulates what happens in life when we embark upon a new endeavor – lessons learned. Life’s lessons are best taught by challenges. END_OF_DOCUMENT_TOKEN_TO_BE_REPLACED

The charismatic David Basse brings hip back the to jazz vocals, this Kansas City native pours out his undivided soul on “UPTOWN” his latest recording available today on Cafe Pacific. If you miss old school jazz vocals with plenty of swagger, then you might want to seriously check out the remarkable David Basse. —Rob Young | Urban Flux Media

For the past twenty years, David Basse has been at the forefront of the music scene in the legendary jazz capitol of Kansas City. Basse carries on a tradition started half a century ago by icons Charlie Parker, Count Basie and Jay McShann. He has played his special kind of Kansas City jazz at concerts, clubs and private parties throughout the world.

When the producers of A&E’s television series “City Confidential” needed to explore the Kansas City Jazz scene for a new production, they contacted and filmed David Basse. Basse has appeared on CBS Sunday Morning, All Things Considered and Barbeque America on PBS. David Basse’s City Light Orchestra has been hailed as Kansas City’s premier swingin’ jazz ensemble. Since its inception in 1982, bandleader and songwriter David Basse’s voice has been a signature of the Orchestra’s sound.

”I love the soul that is your voice.” –Maya Angelou END_OF_DOCUMENT_TOKEN_TO_BE_REPLACED