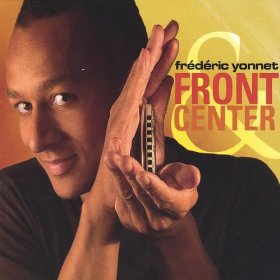 -::BIO::- When it comes to the harmonica, Frédéric Yonnet knows how to turn skeptics into believers. Most people perceive the harmonica as a “side” instrument used in country and blues. However, Yonnet is one of a handful of musicians to successfully demonstrate the harmonica’s versatility as a lead instrument in contemporary jazz, R&B and other genres of music. Yonnet says, “Limitations are not in the instrument but in one’s thinking.”

Clearly, Yonnet has no limits. Just listen to his sound. It funks. It rocks. It hips and hops. It grooves. It sways. It testifies. It prays. It has a reverence for blues and jazz while appealing to a generation breed on pop rock and hip‐hop. He as performed with music legend Stevie Wonder and recently recorded with generational icons, the Jonas Brothers. His current stint with music royalty Prince has exposed him and his powerhouse sound to a wider, more diverse audience. Praise from Dave Chappelle and performances with neo‐soul queen Erykah Badu, Soul prodigy John Legend, jazzman Branford Marsalis, and Jewish raggamuffin Matisyahu have all contributed to his mission to change the way the music industry, musicians and enthusiasts regard the “pocket” instrument.

Look out for Yonnet’s upcoming album “REED MY LIPS: THE ROUGH CUT” on May 4th. While you’re here, visit http://www.fredyonnet.com/index.html for more information about this exciting artist!