Live at the Freight, Jessica Jones and Mark Taylor

In recent years I’ve been afforded numerous opportunities to hear music by revered and unfamiliar artists alike. On this occasion, I’m delighted to experience new music by critically acclaimed duo tenor saxophonist Jessica Jones and multi-faceted French-horn-(ist) Mark Taylor. Consequently, with this offering they’ve drawn from a collage of intricate jazz harmonics, abstract rhythms and improvised music on their latest endeavor titled “LIVE at the FREIGHT” recorded in July, 2011 at the legendary Freight & Salvage Coffeehouse in Berkeley, California. END_OF_DOCUMENT_TOKEN_TO_BE_REPLACED 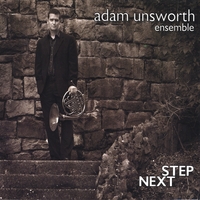 Adam Unsworth is Associate Professor of Horn at the University of Michigan in Ann Arbor. Prior to his joining the faculty at Michigan, he spent nine years as a member of the horn section of The Philadelphia Orchestra and three years in the Detroit Symphony. Adam has appeared as a recitalist and clinician at many universities throughout the United States, and has performed repeated solo and chamber concerts at Carnegie’s Weill Recital Hall. He is the leader of his own jazz group, the Adam Unsworth Ensemble, which recorded the critically acclaimed CD, Excerpt This! and now has completed a second recording, entitled Next Step. The group is embarked on its first U.S. tour in October 2007. ~ CDBaby.com