For many, the story of Weather Report begins with the late 1970s albums that featured the addition of electric bassist Jaco Pastorius (as documented on 2011’s box set, Weather Report: The Columbia Albums 1976-1982, which celebrated the 40th anniversary of the band’s formation). Yet what the six albums that make up this comprehensive collection prove beyond a shadow of a doubt is that the early to mid 1970s saw some of the most adventurous and satisfying work of Weather Report’s entire lifespan. END_OF_DOCUMENT_TOKEN_TO_BE_REPLACED

Lawrence “Larry” David Warrilow, a prominent member of the South Florida music scene, died peacefully, at home on Tuesday, May 18. He was 64 years old. Larry’s music career began in the 1960’s while at Florida State University. He gained notoriety with The Peter Graves Orchestra as a guitarist and arranger at Joe Namath’s legendary night club, Bachelors III, in Fort Lauderdale, Florida. The band had a 5-year run, that included notable musicians – Pat Metheny, Mark Colby, Danny Gottlieb, Mark Egan, Dan & Neal Bonsanti, Whit Sidener, Jerry Coker and Ron Tooley. It was the addition of bassist Jaco Pastorius, pianist Alex Darqui, and drummer Bobby Economou that made a lasting impact. Larry’s collaborations with Jaco, on countless musical projects, gradually developed into a relationship not unlike that of Duke Ellington and Billy Strayhorn where it was often difficult to tell where one began and the other left off. END_OF_DOCUMENT_TOKEN_TO_BE_REPLACED 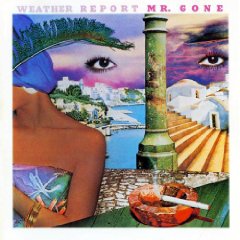 The infamous 1978 album that received a one-star (out of a possible five) from Down Beat magazine got a debate going between the band and the publication, fans amongst fans and critics versus critics in a controversy that still brews today concerning the merits of the eight tracks.

That the follow-up to the brilliant Heavy Weather was certified gold got lost in the mix of the noises that challenged this experiment in sound, with the inclusion of elements as diverse as disco to Avant-Garde. The trio of Joe Zawinul, Jaco Pastorius and Wayne Shorter are riding a crest of popularity after the cross-over hit, Birdland. But rather than play the rock band game of the era and crank out a clone album/single, the trio pursues a parallel trail to 1974’s Mysterious Traveller.

The percussion/drummer spot is unsettled, with Manola Badrena, Peter Erskine, Tony Williams and Steve Gadd handling the duties. The 37:15 is split into two compositions each from Shorter (The Elders, Pinocchio) and Jaco (River People, Punk Jazz), with four numbers by Zawinul; The Pursuit of the Woman with the Feathered Hat, Young and Fine, Mr. Gone, And Then.

That Zawinul used the studio as an artistic laboratory cannot be denied. The “flaws” of the album are based on the group attempting to stretch the sound is a plus….and not a fallen star.