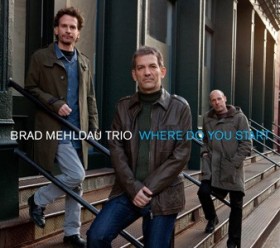 Mehldau Trio, Where Do You Start

Nonesuch releases the Brad Mehldau Trio’s Where Do You Start, a companion disc to this spring’s critically acclaimed Ode, on September 18, 2012. Whereas Ode featured 11 songs composed by Mehldau, Where Do You Start comprises the Trio’s interpretations of ten tunes by other composers, along with one Mehldau original. See below for the complete track list. Ode was widely praised, with London’s Daily Telegraph, in a five-star review, saying that it “shows Mehldau’s inventive powers are as fresh as ever … and the interplay with Ballard and Grenadier is masterly.” The Brad Mehldau Trio is Brad Mehldau on piano, Larry Grenadier on bass, and Jeff Ballard on drums. Where Do You Start is available for pre-order now in the Nonesuch Store, where an instant download of the album track “Jam” is included with purchase.

END_OF_DOCUMENT_TOKEN_TO_BE_REPLACED

Lisa Hilton is a composer – pianist – bandleader – producer who has been hailed as “One of the major voices in the modern jazz community” (The Jazz Messenger) and is compared to some of the best pianists in history in the book The New Face of Jazz for what Down Beat magazine recently noted: “Hilton clearly has a musical voice.” Hilton is especially recognized for her expressive and impressionistic approach at the keyboard. Although she has been compared to such diverse musicians as Brad Mehldau, Dave Brubeck, Oscar Peterson, Thelonious Monk, Erik Satie and even Debussy, Hilton is cited as, “A rarity that she displays a truly original voice,” (The Jazz Messenger). END_OF_DOCUMENT_TOKEN_TO_BE_REPLACED

Nonesuch releases an album of original songs from the Brad Mehldau Trio—Ode—on March 13, 2012. The record, which is the first from the trio since 2008’s live Village Vanguard disc and the first studio trio recording since 2005’s Day Is Done, features 11 previously unreleased songs composed by Mehldau. The trio comprises Mehldau on piano, Jeff Ballard on drums, and Larry Grenadier on bass.

“Ode is a collection of originals that I wrote specifically for my trio with Larry and Jeff,” says Mehldau. “I feel that what they bring to the music in the performance here is inseparable from the tunes themselves.” Most of the songs, he explains, “are tributes to someone else, and I began to think of them as odes, or poems that might be sung; in our case here it’s the singing only without all those pesky words.” Subjects include the late saxophonist Michael Brecker (“M.B.”), a character from the film Easy Rider (“Eulogy for George Hanson”), and the guitarist Kurt Ronsenwinkel (“Kurt Vibe”). END_OF_DOCUMENT_TOKEN_TO_BE_REPLACED