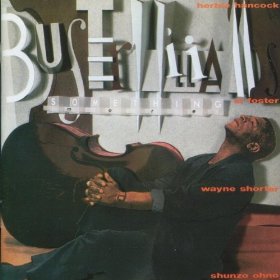 . . . What more could you want? This late eighties classic session on the German label In & Out (who also brought us the great and largely unheard band Roots) features Herbie Hancock (piano and keyboards), Wayne Shorter (soprano and tenor sax), Al Foster (drums), and the brilliant (and largely unknown) Japanese trumpeter Shunzo Ohno. With leader Buster Williams, who has played with Miles Davis, Dexter Gordon, Sonny Rollins, Art Blakey, Freddie Hubbard, Chet Baker, Woody Shaw, and McCoy Tyner, this is a killer band. Somehow, this disc has flown almost completely under the radar. And that’s a shame, given the level of playing consistently on display. END_OF_DOCUMENT_TOKEN_TO_BE_REPLACED

There is something about the combination of Bobby Hutchinson’s vibes and McCoy Tyner’s piano that gives this music a sound that is unique in jaz. These two musicians have a way of blending their lines so perfectly that it is as if the music is playing them instead of the other way around. The bass playing of Charnett Moffet is equal to the task of keeping up with these two musical geniuses. The first cut Serro De Mar is stunningly beautiful and the latin tinged Manalyuca is driven by a haunting bassline supplied by Moffet. END_OF_DOCUMENT_TOKEN_TO_BE_REPLACED 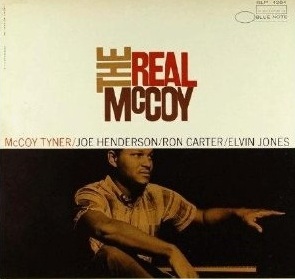 This was the first of 6 albums McCoy Tyner recorded for Blue Note records in the late 60s and early 70s. His earlier records for Impulse (Inception, A Night of Ballads and Blues, etc.) were generally more conservative recordings in the piano trio format. But on Real McCoy he went for the explosive, wide open modal sound of the 60s Coltrane quartet.

Tyner had played with Elvin Jones for over five years in Coltrane’s group and by this point they were joined at the musical hip; as usual, Jones is a polyrhythmic monster on “Passion Dance” and “Four by Five”. Joe Henderson had played in front of Tyner and Jones several times, including the classic quartet date Inner Urge (also on Blue Note); this is among his best playing of the 60s, along with Larry Young’s Unity. His mixture of mainstream playing and wild avant-gardisms is on perfect display. Ron Carter provides a strong, flexible anchor. McCoy’s playing would get denser and heavier over the next few years, but his powerful sound (dark, left hand chords and fast, unpredictable right hand lines) is well featured here. END_OF_DOCUMENT_TOKEN_TO_BE_REPLACED

This is one of the best matchups of two of the most seminal figures in jazz today. There is no saxophonist alive more worthy of playing alongside the legendary pianist from the John Coltrane Quartet of the 1960s than Michael Brecker. His style is very much influenced by Coltrane’s ideas and harmonic innovations but he still manages to have a completely original voice. His playing on this date is up to his usual standard of excellence and truly seems to inspire and push the trio forward. One of the reasons that Tyner and Brecker play extremely well together is that both heavily employ the use of pentatonics. Their styles mesh amazingly well.

The music itself is mostly written by Tyner with a few exceptions including their take on Coltrane’s classic Impressions. Brecker truly extends himself on this modal standard but the highlight of the album is the first track, Flying High. Both Brecker and Tyner are in top form and play beautifully with extreme intensity. END_OF_DOCUMENT_TOKEN_TO_BE_REPLACED

Afro Blue is a melodically and artistically beautiful compilation of music by legendary pianist McCoy Tyner on Telarc Jazz . You would only expect the highest quality in regards to the mastering process that’s currently available from Telarc. That being said, the gifted McCoy Tyner is deemed one of the greatest jazz pianist in the world so I was moved to choose this album based on the contributions of his illustrious career. Furthermore, “Blue” is also highly recommended by jazz fans internationally to be somewhat an introduction to this extraordinary musician playing and stimulating arrangements. Therefore, I say to you, why not start with “Afro Blue” … and join me on this wonderful journey of breathtaking music by McCoy Tyner. ~ The Urban Flux

McCoy Tyner, four-time Grammy award winner and NEA 2001 Jazz Masters recipient, is considered by many as a mystic in the music world. Hailed globally as a master pianist and jazz stylist, Tyner literally walks with 40-plus years of music performance. Tyner’s oceanic sound, matched only by his humility, inspires contemporaries as well as younger musicians.

McCoy Tyner, one of the most innovative and influential jazz piano players of the last four decades, has been a recurring luminary on the Telarc roster since the release of “McCoy Tyner and the Latin Jazz All-Stars” in 1999. Since that initial Telarc offering, he has recorded four additional sets on the prestigious label: “McCoy Tyner with Stanley Clarke and Al Foster” (2000), “Jazz Roots” (2000), “Land of Giants” (2003) and “Illuminations” (2004).

“Afro Blue” is a cross section of Tyner’s greatness captured in eight tracks culled from his Telarc catalog.

An 80s album by McCoy Tyner, but easily one of his most soulful sessions ever — thanks to help from Phyllis Hyman and a host of great guest stars! The sound’s a bit more tightly arranged than some of Tyner’s 70s sessions, but there’s still plenty of fire here too — a bit of a Latin inspiration in the rhythms, really giving new focus to McCoy’s post-Coltrane sense of searching spirituality! Hyman sings wonderfully on the album’s classic “Love Surrounds Us Everywhere”, a brilliant blend of jazz and soul that recalls mid 70s Norman Connors — and on the beautiful ballad “I’ll Be Around”.

Other players here include Gary Bartz, Stanley Clarke, and Carlos Santana — who comes off surprisingly nicely in this setting. Tracks include “Love Surrounds Us Everywhere”, “Hannibal”, “I’ll Be Around”, “Senor Carlos”, “In Search Of My Heart”, and “Island Birdie”. ~ Source: Dusty Groove.com