What did the future used to look like? The space-age exploration of the Mad Men era? The free love and flower power of the hippies? The technological utopia of the early Internet pioneers? The promise of today’s era of global interconnectedness? With each new generation of dreamers, a new future is imagined, and when the future actually arrives, it ends up both stranger and more interesting than we could have imagined. END_OF_DOCUMENT_TOKEN_TO_BE_REPLACED 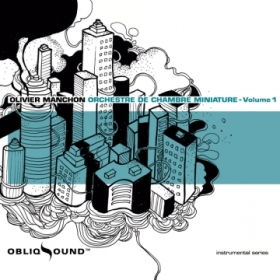 Olivier Manchon ’s Orchestre de Chambre Miniature – Volume 1 evokes images of the fantastic. Just imagine a masquerade wherein a violin, a viola, a cello and a bass dance in a circle around a twirling soloist, suspended in an open void. The French violinist and composer creates a cinematic narrative of jazz and classical music performed on strings and woodwinds, written especially for a select group of friends culled from the best of the jazz, indie rock, and classical realms. Known for his collaborations with indie artists Sufjan Stevens and My Brightest Diamond, and as co-leader of orchestral pop group Clare and the Reasons, Manchon presents a miniature orchestra of just five musicians who sound anything but small. Guests include John Ellis, Gregoire Maret, Alan Hampton, and more. END_OF_DOCUMENT_TOKEN_TO_BE_REPLACED

Undoubtedly Jacques Schwarz-Bart shares this vision put forth by the writer Patrick Chamoiseau, “The contemporary melting pot of cultures and ethnicities has created a worldwide phenomenon of “creolisation”.

This New York based jazz saxophonist, praised by major American soul artists, raised by a Black Guadeloupean mother and a French Jewish father-, grew up between Switzerland and Guadeloupe. The son of two award wining novelists, Jacques followed an original and sinuous path that speaks volume about his identity. END_OF_DOCUMENT_TOKEN_TO_BE_REPLACED

As a female jazz flutist, Anne Drummond is a rarity among rarities. Although the instrument has been utilized in jazz for several decades, it has never been as ubiquitous as the saxophone, trumpet or trombone, and virtually every acknowledged master has been male. That all changes with the September 15th arrival of Like Water, the debut recording from the artist repeatedly named a Rising Star by Downbeat magazine and featured in a cover story of Flute Talk magazine. Among her greatest admirers is one massively famous flutist, Ian Anderson of the rock band Jethro Tull, who sought Drummond out and invited her to join him onstage at a forthcoming New York gig.

As its title implies, Like Water is marked by a fluidity that is itself rare. Exploring the sensual, evocative sounds and intoxicating rhythms of Brazil, and accompanied by a small band of virtuosos–Klaus Mueller and Xavier Davis (piano), Paul Meyers (guitar), Nilson Matta (bass), Duduka da Fonseca (drums), Tom Chiu (violin) and Dave Eggar (cello)–Drummond imbues Like Water’s eight alternately soothing and soaring tracks, both original compositions and carefully chosen interpretations, with uncommon spirit and grace. END_OF_DOCUMENT_TOKEN_TO_BE_REPLACED